The SADFREE Movement, which stands for Smoking, Alcohol, and Drugs Free Movement, celebrated its second year anniversary on November 9, 2018, at the Philippine International Church (PIC) of the Adventist University of the Philippines (AUP). The celebration began with the prayer walk of more or less than a thousand students against the vices, which started at the AUP Soccer Field and ended at PIC.

Some of the special features of the day were the messages coming from both the government and private organizations; induction of the SADFREE Movement by the International Commission for the Prevention of Alcoholism and Drug Dependency (ICPA); and the signing of the SADFREE Day Executive Order. During her message, PCI Desiree Limbo of Silang Police Station, recognized the role of SADFREE Movement to help the youth to be informed regarding the disadvantages of using illegal drugs thus helping the police force maintains peace and order. Secretary Catalino Uy, Dangerous Drugs Board Chairman, during his keynote message, addressed the youth, “Your theme for this year’s celebration ‘Enjoy Life, Choose Right’ is very timely and appropriate. This tells us that our decision matters as it identifies who we are and will also shape our future. To the youth who are here, I would like you to know that your well-being matters to us. We like you to maximize your life and make the most out of it. In fact, I subscribe to one famous adage, which our millennials here have heard of or used many times, ‘YOLO’ or You Only Live Once. I believe this is true so we must use every second, minute, and hour of our life wisely.” He also congratulated the movement as it celebrates its anniversary and thanked the Seventh-day Adventist Church for being a dedicated partner of Dangerous Drugs Board in advocating for a healthy and drug-free society.

Dr. Lalaine Alfanoso, Southern Asia-Pacific Division Health Director, led in the induction of the SADFREE Movement to become an arm of the ICPA. During the interview, she emphasizes that as an arm of the ICPA, like a parent, they will support the movement in all of their programs which includes the training and financial support. This paved the way for the movement to have an international linkage with the ICPA. After the induction, representatives of youth from the Sangguniang Kabataan of Silang, Central Student Council of AUP, and Supreme Student Government released three white doves as a symbol of the freedom of Silang, Cavite from smoking, alcohol, and drugs.

Before the morning program ended, Hon. Lourdes “Omil” Poblete, Municipality Mayor of Silang, signed the Executive Order No. 55 s. 2018, an order declaring November 9, 2018 as a Smoking, Alcohol, and Drugs Free or SADFREE Day in Silang, Cavite. During her speech, she emphasized the reason why she adopted the program of SADFREE Movement. She relates, “This is our comprehensive and holistic program enabling our youths to be more aware and more intentional in being responsible and productive members of the society. Since the launching, we have already conducted various training to our high schools in Silang. We have also reached almost 8,000 students who had pledged support as advocates of our SADFREE Movement. In fact, we have declared Nov. 9 as SADFREE DAY here in Silang. We have also launched our SADFREE Movement Website (www.sadfreemovement.com) to further intensify our awareness campaign not only through our schools but in the world-wide-web as well. We will not stop here, in fact, this will be a beginning of new opportunities to share this advocacy with our loved ones.”

In the afternoon, the SADFREE Movement Youth Alive Facilitators trained the Supreme Students Governments’ Officers of the eight (8) Silang Public High Schools to choose a SADFREE Lifestyle through lectures and team building activities. They gave the over-all seminar workshop a grade of “Very Satisfied” (4.4644 in the scale of 5 where 5 is the highest). They also said that they will remain SADFREE members and advocates of the movement forever and will encourage others to do so. In here, they gave the highest scores of 4.6103.

Dr. Francisco Gayoba, AUP President, reiterated the university’s support to the SADFREE Movement and stated, “We are intensifying our prevention and drug education programs. Several of the directions that we have is we want our students to be more involved in SADFREE Movement by focusing on the activities of National Service Training Program (NSTP) in drug prevention in the communities.”

The SADFREE Movement leadership is very thankful to its benefactors namely: God, AUP, PIC, SSD, NPUC, Central Filipino Seventh-day Adventist Church in California, Sister Eunice Antonio, and the SADFREE officers and facilitators who have given their moral and financial support to make this celebration a successful one. 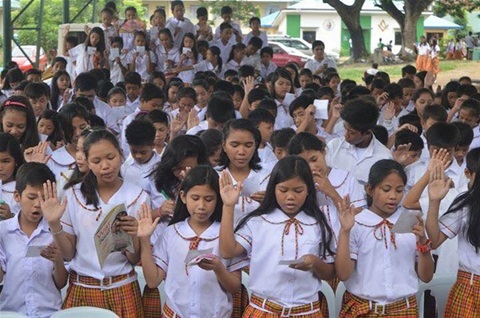 Among those who graced the program and greeted the movement were Hon. Mayor Carla Gálvez-Tan of San Ildefonso, Hon. Congressman Lorna Silverio of Third District of Bulacan, and Hon. Earl P. Saavedra of Dangerous Drug Board.

In her speech, Mayor Gálvez-Tan thanked, congratulated, and encouraged her constituents to embrace SADFREE Movement and to nurture it as it saves the youth of today who will later mold the future of San Ildefonso, Bulacan. She emphasized that whoever the seating mayor is this program must go on for the sake of the youth. She also thanked the Adventist Community Services of the Seventh-day Adventist for helping the town to be SADFREE. The SADFREE Voice of Youth Team from the Adventist University of the Philippines conducted seminar/workshops in ten (10) private and public high schools in the town and one (1) in San Miguel, Bulacan before the anniversary.

"Let's work together for a smoking, alcohol, and drugs free society" Congresswoman Lorna Silverio encouraged all. She added that, "Aking hihikayatin ang aking mga nasasakupan na makipag-ugnayan sa ating mga pastor para isagawa ang SADFREE Movement sa Third District of Bulacan." (“I will encourage the leadership in my constituents to coordinate with the pastors to launch the SADFREE Movement in the Third District of Bulacan.”)

DDB Deputy Executive Director Saavedra sent his greetings to the movement as well as the greetings of DDB Chairman General Dionisio R. Santiago, who was not able to come due to the important meeting called by President Rodrigo Duterte. He challenged the movement to continue its advocacy and to level up to help also those who are already addicted to drugs. He also thanked the SADFREE Movement for being a DDB partner.

One of the highlights of the program was the performance of the Spyros who also represents the PHILIPPINES to Asia's Got Talent. After their performance both Mark and Marco encouraged the youth to be SADFREE. Mayor Gálvez-Tan officially sashed them as the SADFREE Ambassadors.

In his speech, Pastor Petronio Genebago, SADFREE Movement founding president, reminded all that the success of the Movement is not only because of the support of various organizations but because of the living God who loves the youth. He stated, "Let's bring all the glory to God. We have come this far because of Him." He also wished that SADFREE would not only reach its golden anniversary but its centennial as well.

Yes, use them freely to save them from harmful vices and lead them to healthy living. Praying fervently!

Can we use some materials of this program to our school? Since we are going to launch a program on awareness of students on the importance of having a good health, esp. nowadays.

This is a magnificent and wonderful idea!! ❤️❤️💯💯👍👍🔥🔥 i can already envision a SAD Free Navajo Nation Movement already happening! This area is in desperation!! ❤️❤️ lOVING THIS!!! Let’s do this! 🙏🙏🙏🙏